“The Pippa Bacca Foundation was created for the breeding and dissemination of the colored rabbit. The colored rabbit is among the most renowned animals for its bizarre aptitude for art. The Foundation was created to help contemporary man find harmony with the colored rabbit within himself. The Foundation organizes exhibitions in ever-changing spaces lent by those who can do it, this is because voyeurism and the desire to nose around into the house of others is a healthy feeling that the Foundation feels like it has to be dealt with.The funding draws from the assets of Pippa Bacca, kindly expropriated from the earnings from the sales of her works. All collaborators work for the pleasure of working together for free. The exhibitions combine established artists with others who will soon become so.Pippa Bacca is living proof that culture is priceless and that it can simply be born and developed from passion, love and intelligence.”

There are three exhibitions organized by the Foundation: Le mie vacanze, Interno di ritratti and Camera degli occhi; all made by Eva Adamovich, curator of the Foundation, and none of them included works by Pippa Bacca. As stated by Adamovich, the curator’s profession is similar to that of the artist, the material she works on is the people she collaborates with.

Through the discovery of the ring binder that collects the papers of the Foundation conceived by Pippa Bacca, we find ourselves catapulted into a complex and fascinating artistic path, which seems to overcome the Platonic dualism to dive into a universe where doubles coexist multiplying in infinite shades. Art and life do not develop a dialectical relationship, they merge making the distinction between the artist’s works and her social and private habits useless.

Giuseppina Pasqualino di Marineo was born in Milan on December 9, 1974. The third of five sisters with whom she forms “Il Neurone”, a playful name and symbol that highlights a very strong family bond and the need to get out of the singularity to be a part, and often an engine of a collective that makes life better.

Then comes Pippa Pasqualino di Marineo, she works at an interbank services call center and is the source of income that finances the projects of Pippa Bacca, the artist.

Then there is Eva Adamovic, an elegant and somewhat haughty woman, who curates the exhibitions of the Foundation. Finally, the elusive green rabbit, a superhero with a coat of the same color.

These are the five personalities that revolve around Pippa Bacca, five distinct figures that expand the artist’s experiential possibilities, five rigidly maintained worlds: Pippa Bacca and Eva Adamovic had two distinct telephone numbers, the physical one they said was only a slight resemblance.

In 1995 Pippa Bacca made her first exhibition and in 1999 she held the first solo show of her – Angeli: vita, morte e miracoli – at the Slobs Gallery in Milan. Over the years her reference critic will become Giorgio Bonomi, a leading figure of Italian culture who deepens the work of Pippa Bacca through a philosophical reading, now necessary to take down any idea of frivolity in the work of an artist where high register and childhood blend in a cultured and determined way. Through the text La verità delle forbici – Variazioni dal rasoio di Occam, the author highlights the profound meanings that lie behind the simple use of scissors with which Pippa Bacca produces all her works, creations that enter, sometimes in a very delicate way , in relation with the performances, creating two never isolated poles through which is possible to explore themes that are both social and intimate.

“The young artist takes a real leaf, then she reshapes it with scissors, so creating another leaf with a different shape, which is the work itself. But is this second leaf “real” too? Certainly. But how do we define it? With the name of the original leaf or with the name of the one whose look it has taken on?

Another question is asked here (similar to the previous one): where is the boundary between the natural and the artificial? No-one may deny that the second leaf is “natural” in its substance, though it be “artificial” through the artist’s intervention.”

Referring to the cycle of Surgical Mutations, Bonomi highlights how a simple gesture can open to profound questions that lead us to explore the world of nature and the essence of things. Pippa Bacca, with a minimal and delicate, sunny and joyful way, shows the power of a complex and articulated thought that often leads to nature, to the body (private and social) and to the female condition.

Her “making sculpture” removes her from the heaviness of matter leading her towards a contemporaneity that has become playful, immaterial and affectionate. Through colored paper and scissors she manages to attract the user to then lead it, with determination, towards fundamental and urgent issues.

“I have often seen Pippa, miniaturist of the cutout, use paper or cardboard to create worlds that live in everyone’s imagination and bring them back to the surface, both spiritually and materially.
This happened in 2002 with the “popular” series of  Matres Matutae and in 2004 with the egg of original sin, in which Adamo ed Eva, together with the snake and the apple, experience different relational situations in egg-shaped worlds.”

Through these words, Francesca Dell’Amore makes Pippa Bacca’s action radiant and introduces two important cycles of works where the theme of the feminine and that of the relationship between man and woman invade the mystical field. Rich in different levels of interpretation, these creations are united by a profound joy towards a life that is always in relationship, towards a being that does not exist in the finitude of the individual but that opens up to another both divine and human. If the woman, as indicated by Umberto Galimberti, is the “unrecognized interpreter” of the relationship that opens up to happiness and joy, the female body is the primary means of a relational vision since it is capable of containing and merging two lives through motherhood, be it biological, be it spiritual. And it is precisely this love and peace among peoples that we find in the latest performance by Pippa Bacca Bride on Tour. Here religion and material life come together in a complex interweaving of references and symbols, even the faith of Pippa Bacca becomes a universal and concrete message. If art is a symbolic mode of communication through which we try to understand the world and indicate thoughts, the journey undertaken with Silvia Moro, regardless of the tragic ending, becomes a fundamental work to discover a powerful and determined vision of the world that is not only of the two artists but of many people. Trust in others and in the possibility of the brotherhood of people is shown here through a performance where art and life do not merge because they are already two ways of seeing a pre-existing unity.

Pippa Bacca always wore green; in a precious meeting with one of her sisters, a biographical reference emerged: their mother Elena dressed the five sisters in the same way to make them recognizable and not lose them. A purely practical necessity could appear, and perhaps in part it was, like a charming eccentricity. In the case of green dresses, the convenience of washing everything together, the practicality of clothing blends with the artist’s personality, but she doesn’t want to convey a precise message. In the same way, the artist’s personality influences the works but it is not the ultimate purpose of the same that become vehicles of a thought that finds strength in the conviction of those who created it.

Distinguishing, especially in Pippa Bacca’s research, art and life, art and the multiple personalities created by the artist, becomes only a didactic and useless path that does not change the strong message that Pippa communicated through a public path that lasted only about ten years but full of different shades and many events realized thanks to the unstoppable desire to never waste a moment of the time granted on earth.

The house designed by Pippa Bacca to live with il Chiari, her boyfriend who is a Vespa rider, now hosts the headquarters of the Piero Manzoni Foundation, the artist’s uncle. Even if Giorgio Bonomi maintains that Pippa’s work has no points of relationship with that of Manzoni, moving through the rooms we notice the same ironic and sunny vision of life, two strong and determined personalities who have changed the world of those around them, and not only that, with a powerful lightness. The bathroom is all green, on a high wall of reproductions of the famous “canned shit”. The smile for the unexpected location is immediately distracted from the furnishings of the room: three toilets, three shower heads inside a shower. Reading the fantastic story by Giulia Morello – Sono innamorata di Pippa Bacca. Chiedimi perché! – I discovered that there is a name for those bathroom fixtures:  matrimonial toilet.

There would be a thousand other things to tell in order to present such a complex artist full of strong thoughts but it is in the bathroom of the Foundation that an epiphanic vision of Pippa Bacca’s work is presented. Her research, and perhaps her life itself, are based on the need to relate to others, to activate the people around her to have fun and to understand and improve the world together.

Discovering in person the unsettling generosity of one of her sisters, discovering her world through Morello’s fundamental and beautiful text, one can understand the importance of hitchhiking in the artist’s research. Moving looking for a passage from time to time not only shows trust in others but generates it, almost by magic, in people who had never paid attention to this way of doing. Through a gesture that is then made artistic with a performance or with the creation of photographs cut out in the shape of a means of transport (Più oltre), something really changes, one person at a time. No matter if this way of doing in Pippa Bacca stems from a habitual family practice, influenced by the Catholic faith in others; it is important to show how the lack of trust in people is only an anti statistic prejudice, of how with small gestures, full of meaning, you can really change things.

I did not know Pippa Bacca, I was very distant from her way of thinking and I never write in the first person. I do today, because in the end Pippa Bacca has changed me a little for the better, and this is what great artists, beautiful people can do. 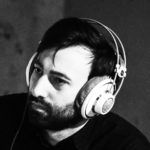 Born in Monza (Italy) in 1986, he graduated in Arti Visive in Bologna. He works as an independent author and curator after having collaborated with prestigious cultural realities in Italy and abroad. Director of Forme Uniche, he is a Professor at the ACME of Novara and Head of communication for Linea festival.

DO IT ONE MORE TIME, HANS

A great public art project that can take up and

Portafortuna is a public program presented in Florence by Toast

THE FOUNDATION MORRA GRECO TOLD THROUGH A FOCUS ON FOUR EXHIBITIONS

IN SEARCH OF A SELF THAT PERHAPS DOES NOT EXIST