FAME was the last Edoardo Manzoni solo show at State Of, a new contemporary art space in Milan, hosted by Aretè Showroom, a large space, coordinated by the owner and promoter of the project Gianluca Grilanda, that explores the multiple languages of contemporary art, from painting to emerging experimental research, mirroring the study and training of the two project coordinators, Luca Zuccala and Manuela Nobile, to which is added a research on intersubjective and post-expression languages medials of the internal curator of the space Dario Moalli.

The exhibition seems strictly related to hunting, but it’s just the starting point to develop a consideration/thought about tools, nature, human beings and animals. Born in the middle of Pianura Padana, the young artist takes from the countryside its characteristic of suspension in time, to analyse human beings and different temporalities.

Gianluca Gramolazzi: Hi Edoardo, your artworks are composed by different media. Is it related to your studies? Where does your research start from?
Edoardo Manzoni: I usually work for a long time on a single theme but I try to experiment with the media I use to formalize my works. The Academy of Fine Arts has influenced this approach of experimentation, having to propose many projects for so many different subjects. The most natural thing for me, however, was to always start from my surroundings to produce. Therefore, my research came from the countryside, the rural reality stimulated my interest in the relationship between natural and artificial, human and animal.

G.G.: In a rural context, you opened an artistic residency called “La Fornace”. Could you tell me more about this?
E.M.: The context you’re talking about, to take up the previous answer, is an old farmhouse where I grew up, where my family lives, a place dating back to the second half of the 19th century called “La Fornace”. It’s the warehouse where I draw on materials. At first I didn’t have many places to exhibit and document my work, so I started doing it there, in the very place where they were born. It was also a way to free myself from the obsession of the white cube dynamics. Today, the difference between a work of art and its documentation is becoming more and more fleeting.

From this was born: Residenza La Fornace, a photographic documentation project that involves several artists to dialogue with this farmhouse. We propose for each one to present a work to be installed in the context, I live it as an extension of my artistic practice. The project aims to treat the documentation of the works as the exhibition itself, for this reason the location remains secret to the public, presenting the photographic material only online. It’s a way to work with artists in different times and spaces. For this reason, we thought it was interesting to relate to the rural following a calendar close to the peasant one. The first year was divided into four chapters, dedicated to the four seasons. This year instead will be dedicated to the four lunar phases, the period of work will follow the transition from one moon to another.

G.G.: I notice a constant relationship between different times: past, present and future. How do you relate with time? Do you think the past is useful in understanding the present and future, or is it a constant evolution?
E.M.: I always start from the past to create. My practice is based on a continuous recovery, in an attempt to reconnect fragments and narratives, collective and personal memories. The lack of a single direction of development towards which directs us changed our perception of space and time. We live a time that is no longer linear. It seems that the latest generations of artists have more and more to do with the rediscovery of past narratives, with the consultation and reworking of archives and materials in an attempt to give life to new forms of creativity in the present. The Internet has incredibly expanded the memory of the world, thanks to increasingly efficient media and methodologies related to data storage. However, reality seems to have lost what we could define as a precise imaginary of its own.

G.G.: Why do you integrate digital with analog?
E.M.: My works are often made up of several passages and digital is often one of them. I usually take photographs to start designing, I work with them digitally, after which I try to bring the work back to a physicality. A particular example I would like to talk about is the series: September, where I retrieved some paintings from home represented by hunting scenes, I scanned them and from the digital  file I created several works. In one in particular, I present these paintings on tablets installed on branches by using brackets. It’s an installation that tries to suggest an atmosphere related to the countryside, the wood harvesting season and the one in which hunting begins (September). The association between natural and digital elements and the theme of hunting is intended to deliberately complicate the discussion, bringing it to more complex issues.

G.G.: Most of your artworks are ambiguous. What’s the purpose of it?
E.M.: I like to think in terms of ambiguity, let the suspense, the logical and the irrational intertwine without offering an immediate response. I am interested in working with world objects, trying to detach them from the network of relationships that keep them within the obvious, to put them in crisis, to bring them to different keys of interpretation, to think about their potential of being a work of art. In my last solo exhibition at State Of in Milan, I took up the theme of hunting again, thinking of an analogy between the figure of the artist and the hunter. Disseminated in the exhibition space, these works are presented as elements halfway between the furniture object and the animal trap and the sculpture. The aim is to trigger a tension between the object and the viewer, given by feelings of attraction, seduction and repulsion.

G.G.: In spite of the hunter or the wizard, you utilize violence and seduction making them unclear. In doing so, you make a clear political statement. I know you don’t like to be clear (in respect to your production), but could you tell me how you conceive violence and seduction?
E.M.: If seduction is a form of persuasion using games, allusions, flattery and deception, I think that the artist, the hunter and the magician can be considered as professional seducers. Their ability is to disorient, enchant, divert the seduced from his present to take him with violence into a mysterious and unpredictable territory. The artist plays with reality, uses it like a magician to seduce and deceive our senses, just as the hunter draws his prey seducing it, attracting it towards his own trap with rather creative solutions, such as games of mirrors, calls that reproduce the sound of the prey. Through my artworks I try to blur the border between artwork, ornament and trap, bringing the viewer into a process in which he can feel like prey but at the same time predator

G.G.: The objects you use are tools. Digital screens and traps are more and more integrated to human beings as prosthesis. How do you relate to this concept?
E.M.: My interest in the history of the relationship between man and the material world has inevitably led me towards the concept of prosthesis. It is one of a story that starts with the homo habilis choppers and arrives to modern technologies. The objects that have always accompanied man’s life are not only tools but also bearers of social messages and energy, they are animist presences. Today the presence of objects is reflected in our need for companionship, the technological object is constantly present in our lives in a process of mutual domestication. Subject and object are no longer conceivable as separate units but as interdependent within a process of continuous interaction. In my latest pieces I take up the concept of prosthesis through the theme of traps. Even the dog, an important figure in my research, is the hunter’s prosthesis, his alter-ego.

G.G.: What will your next exhibition be about?
E.M.: The next exhibition I’m working on will be about bird calls. It is assumed that the origins of music can be traced back to the human imitation of bird singing. Once again I was inspired by the relationship between hunter and animal and by seduction as a form of violence. 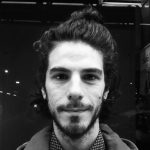