This is the story of a cultural adventure with features very similar to a chivalric journey. The protagonists are two fearless young people from Lombardy with noble and generous hearts, close to those we have come to know in the pages of Ariosto, Cervantes, or Moderata Fonte. As in any self-respecting epic challenge, battles and pitfalls await them along the way, but their hearts will always remain steadfast in their chests. Of course, adversaries and challenges will have different shapes and guises from past ones, but they will be no less devious or deceitful.

Our protagonists decide to open a bookshop in Italy, one of the least read countries in Europe (1). Scornful of the danger, they also dedicate half of the space to contemporary art and proudly defy Italy’s suspicion and total indifference toward artists. Are these not the proper premises for an impossible undertaking or a current chivalric adventure?

In times not out of suspicion and in contrast to the progressive urban gentrification in Milan as much as in global metropolises in general, Beatrice and Stefano 2017 opened the dances and inaugurated Spazio Gamma. Beatrice Dallavalle is a Literature graduate who madly loves punk-hardcore music and works as a librarian. Stefano Non is an artist and activist, and he divides his time between working at the Castello Sforzesco archive in Milan and taking part in antagonist demonstrations of social criticism. In the ‘cool’ and gentrified Isola district of Milan, the only way to start a cultural research enterprise is to rent a crumbling space completely in need of renovation and, therefore, affordable. First, our bold people dedicate themselves to taking care of the space, revolutionizing its structure, ‘having a finger in the pie’ and growing fond of every physical and mental corner. From the start, Spazio Gamma takes shape from a conceptual dimension that imagines, as much as from a manual one that plasters and whitens. Ideas and matter; everything comes together.

At Spazio Gamma, Beatrice’s editorial soul and Stefano’s artistic soul ensure that the two disciplines always embrace, mix, distance, and respect each other. Literature teaches visual artists to fall in love with novels and essays and not to exploit books just for a few quotes in artworks like vampires. Books should be experienced in their content, the pages’ smell, and the bindings’ feel. Contemporary art teaches the most avid readers, but occasional exhibition goers, that snobbish and rejecting boundaries break down with a resolute education of the gaze. The work of art, long before it is content, is emotion.

As in every epic poem, the knights meet essential helpers along the way to meet the challenges that await them. In this story, the helper is called Devendra, a fourlegged condensation of sweetness and friendliness. Alongside Devendra, no matter how daunting the obstacles, our protagonists are never alone in facing them. The little dog, generous with affection, has the extraordinary gift of being able to instantly mitigate the anxiety and stress caused by the task of survival in the Italian cultural system. The ‘Bel Paese,’ suffocated by the adoration of the ashes of tradition, is still unable to convince itself that this appellation derives from the trust placed in the innovative minds that were its contemporaries from time to time.

This story is set in 2022, where societal values are very different from those sung about in the poems of chivalry. Workplaces are rarely understood as places of empathy, mutual trust, exchange, and personal and professional growth. Thanks to evident political and social sharing, Beatrice and Stefano have structured Spazio Gamma based on a moral architecture and existential planning, which blurs the boundaries between life and work. In the four years of programming exhibitions, publishing presentations, and debates offered by Spazio Gamma, it has always been impossible to feel like a mere spectator or a person looking for the next book. Spazio Gamma is where people and souls can meet, exchange ideas and critically compare notes. Beatrice and Stefano understood being in a community as an added value, and as a result, they have created a sense of familiarity that is invaluable in a city like Milan.

In the chivalrous adventure of Beatrice and Stefano, the most feared and frightening adversary is balancing the budget. For an exhibition space of contemporary art and a cross-sectional bookshop with a selection of art, literature, and science texts chosen through a reasoned critical path, making ends meet is difficult in Italy. Despite the birth of the publishing house Gamma Publishing (with its ISBN code), exhibitions, performances, public programs, books presented, and the many that can be purchased, the Milanese municipality ignores this reality. No funding for projects and almost no public subsidies(2) , just lots of free compliments and patronage, always welcome but of little use when paying the bills. Our paladins don’t give up and continue undaunted to self-produce and selfmanage Spazio Gamma, uniting out of necessity and spirit of initiative the cultural project and the entrepreneurial one (according to the etymology of the Latin verb imprendere: “to undertake,” literally “to take upon oneself,” “to start an initiative”). Our cavaliers take on entrepreneurial responsibilities and, having sharpened their swords, start a business, ‘take upon themselves’ every risk, and fight every day for the value of their project. The privilege of autonomy, of creating something of one’s own, guarantees liberation from an alienating working condition and allows for a divergent narrative but multiplies the hours invested. In supreme contrast to the contemporary culture of commodifying knowledge and human existence, Spazio Gamma understands work not as simply profit. They transform the concept of economic ‘performativity’, so dear to running cities, dwelling on the social function of culture and its transmission.

New ventures await our protagonists on the horizon. Spazio Gamma is preparing for a second act, with a new location but the exact balance between art and publishing. The “Spazio Gamma Open Library” online project will remain fundamental, intended to create “a web version for each book published in the physical space.” The Home Page looks like a traditional bookshop; on the shelves are all the editorial covers of the texts, and, by clicking on the icon, one can access the book in flipbook format. The digital version is interactive and rich in features designed to study publications: active hypertext links, the possibility of underlining text, enlarging images, taking notes, and supplementary notes. As conceived by Beatrice and Stefano, the Open Library fulfills an essential task of social inclusion and cultural dissemination; in fact, it drastically reduces the geographical and economic gap for the content produced: anyone, anywhere, can access content free of charge with a simple click. Version 2.0 of Spazio Gamma envisages the inclusion of an international cycle of artist residencies, educational workshops, and reading groups, where the familiar atmosphere that has always characterized the space becomes an integral part of the proposed activity. Are not the adventures of the protagonists of the poems of chivalry similar to the lives of many young Italian cultural workers? Are they not for both all-embracing experiences characterized by an unavoidable ethical posture and countless challenges? Do they not share the same aptitude for action and courage? After all, only noble hearts have the ardor to ask themselves what they can do to change something in the world.

2. Like many other activities, in 2020 Spazio Gamma received a public subsidy as compensation for pandemic closures. There is no state funding for the cultural offer of exhibitions and publications, so support has so far been possible thanks to international organisations such as the Istituto Svizzero di Milano, the University of Malta and the University of Edinburgh. 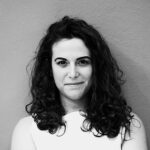 Sofia Baldi (Fidenza, 1995) is a freelance curator.
Since 2017 she has been organizing contemporary art exhibitions, public programs, and ad hoc art therapy workshops for public and private institutions.
She is currently the curator of the fashion brand Corneliani s.p.a for which she founded the Corneliani Art Collection and realizes ad hoc transmedia artistic strategies. Sofia Baldi is the curator of the Alfabeto Bianco project space (Piacenza) and the curator of PSICO.LOBO, a collective between psychology and performance.