I want to start my discussion with a brief introduction. As the first person invited to participate in the V-SPACE project, Made in Mind asked me to contribute with a critical text on the relationship between art and new technologies. My intention is not to dwell on the processes of “digitization” and on the “rush to renewal” that has characterized many institutions and cultural realities in this last period of health emergency / pandemic. Enough discussion has already been made on the ineffectiveness of most of these operations carried out and launched in recent months (many of which are already extinct) and on the overabundance of contents, formats and improvised online direct without any reasoned planning and, above all, without real skills and a real underlying goal.

As a young curator and operator of contemporary art, my will is to introduce a deeper and delicate concept which, in my opinion, represents the real change that digital is silently triggering in art, that has always been governed by immutable and pre-established rules and dynamics. Today, for better or worse, everything is changing. Even the unique and unrepeatable experience of the encounter with the work of art as a physical “object” in a real space, considered eternally irreplaceable, is seriously questioned.

In our contemporaneity it makes little sense to make distinctions between the digital and real world, between online and offline, in a historical period where our whole life is immersed in incessant rhythms on these new platforms. It is also true that, compared to other sectors, the advent of digital in art necessarily implies deeper and more complex reasoning.

In fact, technology cannot be considered as a way to deepen and support, or as a simple ally that acts on a parallel track, it is already revolutionizing the logic of production-use-validation-exposure of the work of art, questioning its very reason for existing.

In my opinion, it is precisely there where the dilemma of the relationship between digital and real materializes and it is truly urgent to be investigated. I am not talking about the usual “digital will replace the real”, but in a more radical meaning, in which the work is a real object and, at the same time, thanks to its nature, an immaterial image. As we know, the Internet has opened up countless paths and possibili- ties of transmission and use of the artworks, or rather, of its digital extension: the image that today allows it to be seen

everywhere, bounced, digested, shared, commented on, loved and criticized while its physical copy is still stationary in the artist’s studio or kept in a museum.

The proliferation of images of artworks, that are published every day on the web and on social networks and the infinite interactions, tell us that this process is now in the midst of its evolution and that it can no longer be ignored. The digital revolution has introduced new dynamics within the old art system that has necessarily had to adapt to these changes, but has also profoundly influenced the meaning of producing art. What happens, in fact, when our reality is conditioned by the digital and is even at the service of it? In the art world, this question then becomes more delicate.

From direct experience, I can say that today many exhibitions, projects and collaborations are born for the potential of being (and not becoming) an online content, framed in the perfection of an image and in the validation of a community, rather than a public. The digital is therefore not an extension, but a starting point for the conception of an exhibition and even for an artwork (and we are not talking about works by new media artists designed for these mediums). The experience of our own reality has changed significantly with the massive use of these new media: when we participate in an exhibition, we already think about the best image to upload on social media, to document a presence more than an experience of the artwork, as we had the camera lens imprinted on the retina. These new behaviors (unimaginable even just 10 years ago) are not necessarily to be considered as a problem, but it is clear that they completely overturn all the paradigms and perspectives with which we usually approach art.

My theses take on a great responsibility because they actually arise from a strong awareness that comes from within. In fact, since 2017 I have been the founder and director of the online platform Artoday, created with the aim of promoting, supporting and narrating today’s art in today’s world through the work of emerging talents of international contemporary art. It can be said that my professional career in the art system actually began on the net. My intense experience with digital, however, gave me the opportunity to fully understand all its logics, its potential, but also its weaknesses, moving away from many of the dynamics I mentioned a little while ago and approaching art with these means in a diametrically opposite way.

In fact, in Artoday we are Digital Curators, as many professionals define our activity. This term, that even a few years ago could be considered utopian and almost senseless, perfectly defines our work of selection, storytelling and sharing of art through online. We use Instagram as if it were our ‘gallery’ to present artists chosen every day through a careful process of study and research which, however, takes place outside the network. Our offline research avoids the risk linked to deception of numbers: “the more an artist has followed online, the more valid he/she is”. For us these channels become fundamental, however, to take our business to a next step which consists of interaction (e.g. with international artists), in the meeting (Studio Visit) and therefore in the construction of a vast network (currently composed of more than 16k users). Today the overproduction of content and the pollution of images on the net has made our work necessary and urgent also to implement a slowdown, an understanding and a “real” proposal for the dissemination of more sensible and reasoned art. Our goal has never been to be prosumers of this continuous flow of images because what has always interested us is what is behind the artwork, the artist’s thought and above all, its story. This approach has allowed us to evolve all these virtual interactions into real and professional relationships, as curators, outside the network, for exhibitions, projects and collaborations with artists (eg. The Wall Project), but also to create a real ecosystem of professionals such as gallerists, curators, collectors and art-lovers all over the world who actively follow us today.

In this way, the digital becomes a medium and not a mere end, creating extraordinary opportunities also to design and live new experiences. With Artoday we have applied a process that is exactly the opposite and different from all the others: we started from the digital to arrive in reality.

In order to find a balance between a dynamic -but almost spasmodic- production and use of the digital image and an immobile thought, “conservative” of the intrinsic experience in the work of art, it is necessary to re-evaluate an issue up to this moment still not raised: the concept of “exhibition”.

The exhibition dimension is, today, the most important tool for recontextualizing and reviewing artworks in their complexity of experience linked to the real dimension and the immaterial one, as an image, where it is also possible to see fragments of eternity. Addressing a discourse on the exhibition display means becoming aware of the meaning of the artwork, of its reason for existing in a certain space-time, of its action in the world and of its potential in reformulating it. We could somehow go back to talking about that intervallo perduto (lost interval) mentioned by Gillo Dorfles himself in the 1980s. 40 years after that empty space, that necessary pause for reflection between us and the artworld, appears as a distant memory. Technological progress is unstoppable and will continue, through ever new and different media (eg. virtual and augmented reality are already entering their phase of adoption), to revolutionize all sectors, including art.

Real-digital, two words that together make up a perfect combination. Unlike many others, in fact, I am convinced that one dimension will never replace precisely the other one because they are strictly interdependent. The choice of the starting point and which side of the coin to dwell on is up to us. For new generations, however, it will become increasingly important to be able to trace and discover the generating moment of the artwork, and the first motion and intrinsic thought that gave meaning to its existence in the world; and to take care of the virtual context in whose image will inevitably come back to life again, again and again. 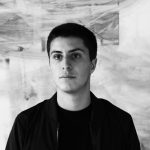